What is the Two Hundred Club?

This hunt was one for the memory book for sure. We had been getting several trail cam pictures of this buck in the west food plot just about all late season. One thing we noticed if we went in there to hunt this buck never showed up. He was seen a couple times headed east thru a part of the ranch we call the "BOWL". So when Janice and her husband arrived from Arkansas we discussed what caliber of whitetail they were hoping to harvest. They mentioned the size did not need to be giant they just wanted to harvest a typical type of rack. So I mentioned this buck to them, I said he is a giant but also has a typical type of frame. I said lets just set in the west food plot and if you see him and like him lets take a crack at him. If you don't like or see him maybe something else you do like will show up. After 2-3 sets he did not appear. So I suggested to set in the "bowl"- we know that's his escape route. I'll go into the west food plot area and he might sneak out the east side thinking he is escaping, instead he will be headed right into you. Sure enough it worked like a charm. Brett set with them in a blind in the "bowl". I went walking to the west food plot area he slipped out the east end headed into the bowl. I don't think when Janice saw him she hesitated for a moment. Shots rang out on that cloudy, foggy, drizzly day! Janice had harvested a GIANT whitetail and a well designed plan came together. 267" rough score. This buck played that escape one too many times. Congratulations Janice on a great buck!

The Two Hundred Club is an exclusive guild of members who have taken a deer with a gross score of 200 inches or greater. A difficult challenge, the 200-class harvest compared to all other class animals is about 7.5%. Try your luck and skill this Fall, take the two hundred challenge at Trails End Sanctuary. 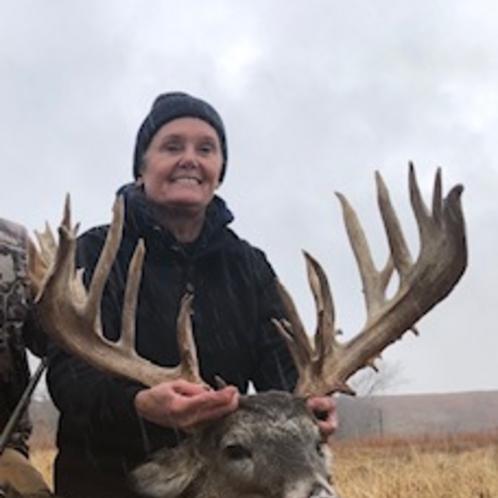